Promoting women-led business will get us to a more productive society.

A productive, happy family is one where each member is empowered to express his or her individual talents, unconstrained by narrow parental expectations. Similarly, a healthy economy makes the best use of all the different skills and experience its members can bring to the table.

In the “Mad Men” generation, the white boys’ club of the 1960s, the US economy could quantify economic output from only about half its talent pool, the men, while the other half contributed mainly on the consumption side. Today that has changed, and more women work and reach positions of leadership. It is doubtful, however, even in the US, that we are putting the talents of our population to their best use, given that women are certainly as talented as men but still contribute less to the economy. Our economy suffers from this distortion, and for the sake of the economy we should make sure every individual has the free choice, and the incentives, to contribute his or her talent.

That’s why we still need to reward and stimulate women entrepreneurs, women in management positions, and women on boards of directors. Women-owned shopping website Pink51 does just this.

Pink51 could be described as a start-up Amazon of women-led retail. Since its launch in June 2014, it has attracted 600+ retail affiliates and has another 500 businesses vetted that should be uploaded to the site this month.

Here’s how it works: shoppers enter the Pink51 website and browse the retailers listed there, which include Target, Best Buy, and Macy’s. To be listed, retailers have to be at least 50 per cent owned by women, or have at least 20 per cent women board membership, or have at least two senior level women executives, or a woman CEO. If you want to shop at, say, Macy’s, you are redirected to their website and you can shop normally. But a portion of your spend goes back to Pink51, which then donates 10 per cent of its profits to charities for women and girls that shoppers have voted to select. The website also tracks those charity donations.

A browse through the biographies of Pink51′s management team is itself a tribute to women’s leadership: the CVO (Chief Visionary Officer) is a partner at DLA Piper, the world’s largest law firm, the CEO came from Goldman Sachs, the CMO from The Walt Disney Company and the World Bank.

Perhaps most unusual for a shopping site, Pink51 includes a pitch for “Pinkonomics” to help shoppers feel they are part of a women’s empowerment movement. “Pinkonomics is the female economic power that fuels our economy,” reads the website. “We believe it can be harnessed and leveraged to support women on all levels, from daughters on the playground to moms in the boardroom, from home office to the corporate office, from the small corner store to the largest publicly traded companies.”

Inc. – Why You Should Shop Pink 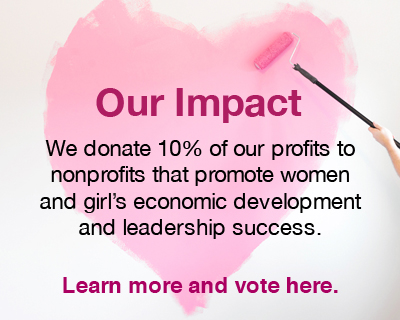